Reflections on the 59th Venice Biennale. Part 2: Delirium in the Giardini, Exhaustion in the Arsenale

The title of the show Milk of Dreams is lifted from a collection of illustrated stories which Leonora Carrington told to her children, and initially drew on the walls of their home in Mexico. Of course, these walls do not make their way into Alemani’s exhibition, but the illustrations that do (gathered in a cabinet alongside other children’s books, and illustrations by Paula Rego, Claude Cahun and Lisa Deharme) speak to an artistic practice which melded private and public life, finding new ways to bring distant or imaginary worlds into the everyday.

This same drive to visibilise connections to elsewhere might be considered in relation to the forced movement of so many artists of Carrington’s generation from one place to another during war, and the ensuing state of existential (if not literal) exile this so often produced. In the contemporary context of the Venice Biennale, the Pavilions present a backdrop of labelled and partitioned national spaces, which may seem outdated. Despite ongoing criticisms, perhaps it is the challenge of this inherited, and sometimes awkward, palimpsest which presents Venice as a relevant site for contemporary curators and artists to respond to, asked to find ways to explore and transform this historical context anew.

The Giardini are home to the most grand and impressive of Venice’s Biennale architecture, and the swapping, loaning and recycling of these charged Pavilion spaces plays a conspicuous role this year. One of the most interesting ‘conversions’ was that of the Dutch Gerrit Rietveld-designed Pavilion into the Estonian Pavillion. Whilst the Dutch relocated to a church in Cannaregio, the Estonian curators heightened the potential disorientation caused by multiple, layered national ‘labels’, re-directing visitors away from the front doors towards one of two un-signposted entrances at the back. 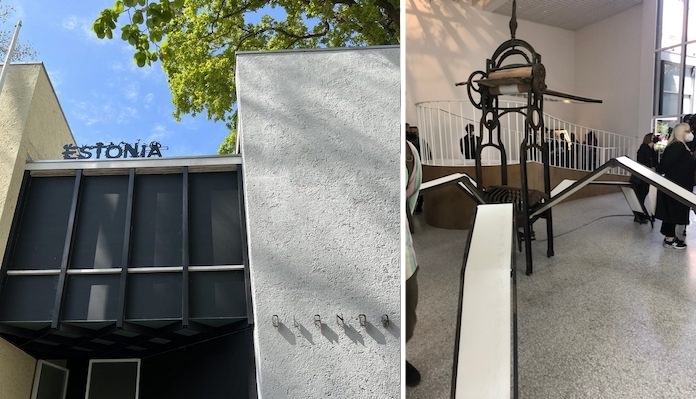 Once inside you are met an ascending dead-end path, whose traversing – by those bold enough to evade hesitation (not me) – activates the Pavilion’s central kinetic sculpture, a giant spider-like machine regurgitating reams of paper down its legs, as a series of botanical prints rotate at its centre. Multiple video screens and Wardian display cases surround this strange automaton, offering a dizzying fount of information about the colonial pasts and present of Estonia, the Netherlands, and Indonesia, centred around a psycho-botanical history of the orchid, Orchidelirium. This is narrated in part through the biography of 19th century botanical painter Emilie Rosalie Saal, who shapeshifted from Estonian serf to colonial lady of the manor in the Dutch East Indies, where she dedicated her time to documenting local flora and fauna. (It is of note that botanical paintings are here presented as a decontextualising practice; elsewhere, 17th century botanical paintings by Maria Sibylla Merian – the only pre-19th century work in the Milk of Dreams show – present an alternative perspective, where plants are paired with the insect species which use them to complete their metamorphoses).

Nearby, what is usually the Nordic Pavilion (shared by Norway, Sweden and Finland), another large modernist structure in the centre of the Giardini, is lent to the indigenous Sami people, whose homeland, Sápmi, traverses a Northern tract of these three countries, plus Russia’s Kola Peninsula. This gesture – clearly incongruent with the troubling reality the Sami face in their homeland – is empowered by sincere and moving personal narratives, embedded within the works on display. All of which centre in some way around the Sami’s relationship with their reindeer kin.
At one end, a 6-part narrative painting by Anders Sunna depicts (and is framed by binders of paperwork documenting) his family’s attempts to recover ancestral farming land from the Swedish state. Opposite are suspended sculptural objects by Máret Ánne Sara – including ethereal cloud-like forms composed of reindeer sinews, which are embedded with contrasting molecular compositions. One emits the scent of ‘fear’ (collected from reindeer held in stressful conditions, and diesel motors) and the other of ‘hope’ (collected from maternal human and reindeer milk, new born babies, and tundra). Such references to motherhood, renewal, and a determination to find ways to look towards the future, are resolutely brought to the fore in Pauliina Feodoroff’s collective performance piece, Matriarchy, staged around and within the Pavilion.

This drive not just to preserve, but to keep practices and knowledge alive through their continual reanimation, reverberates throughout the Biennale, both in responses to Venice as a site, as well as – in perhaps more complex ways – recent world events. The Russian invasion of Ukraine cast a definite shadow which the curators didn’t (couldn’t) ignore; the decision to leave the Russian Pavilion empty through the duration of the Biennale is felt on the ground. A monumental pile of sandbags erected nearby, in a reference to Ukraine’s protection of its public monuments, seems to speak to the painful absurdity of these events.

Wandering through the Arsenale’s web-work of Pavilions, I come upon the Ukrainian artist Pavlo Makov’s Fountain of Exhaustion. Acqua Alta – a 3-metre-tall pyramid of bronze funnels, through which a continuous stream of water is poured, flowing down through multiplying rows of funnels, and emanating from the bottom in a series of diminutive trickles. Asking around for further information, co-curator Boris Filonenko explains that we were standing within the Ukrainian Pavilion, located at the crossroads of several routes through the Arsenale complex. This quietly potent work constitutes the first public realisation of an idea first conceived nearly three decades ago, in 1995.

It was initially formulated in the context of post-Soviet Karkhiv, where floods and poorly designed urban infrastructure (by a Russian colonial rule with little knowledge of local land use and waterways) often led to weeks without a water supply. At the time, a sculpture apparently symbolising the exhaustion of life was not perceived as an optimistic enough statement for display in public space.

When asked to represent Ukraine at the next Biennale, Makov saw Venice as an ideal location for the work to be (re-)realised, the work having now metamorphosed into something which is, as Makov put it, ‘so many years later… about a global exhaustion’ – existential, logistical and political. As the delayed Biennale finally approached, the context had once again shifted, amidst hints of Putin’s imminent invasion. The 78 bronze funnels had by this time been made, and on the evening Russian forces arrived, curator Maria Lanko piled them into her car (alongside her dog, and colleague Sergiy Mishakin) and began a 3-week drive to the border and on to Vienna, whence the sculpture was sent on to Italy. In Milan, a foundry was commissioned to build the fountain’s hydraulic structure, which had to be self-contained to function within the historic Arsenale. As such, the journey from the Ukraine to Venice is now embedded in the materiality of the work.

In its repurposing for the Venetian Biennale context, liquid finally pours through the veins of Makov’s Sisyphean anti-fountain, connected now to Venice’s own state of exhaustion: its atrophy around and yet reliance on continual floods of tourists; its enduring struggle to manage a precarious relationship with its aquatic surrounds; and its positioning as a kind of premonition zone of climate change’s most immanent impacts. It is exhausting, but on it goes, like the water recycled and poured back into the fountain. And as streams of water multiply down its endless, absurd cascade, the work also speaks of alternative endings and futures. Of the inevitability of change and transformation, and yet also our ability to adapt and respond to this. In Venice, the work seems transformed into a mixed message – one of exhaustion, but also one of hope.

Makov’s fountain also echoes that same visual motif encountered at the start of the show – that of suspended webs, net-works and other visual forms of entanglement – though here, water serves as the web-work or thread among which the solidity of the work is somehow suspended. It is of note that in Ukraine, water fountains have historically played an important role as spaces of communal gathering, and the fountains running through historical Italian cities like Rome also maintain a sense of life and renewal in the city’s public spaces. In the Venetian context – where water is so ubiquitous, and a source of fatigue as well as of life – carnival, festival and collective ritual provide a more periodic, albeit recurring ‘fountain’ (literally, ‘source’) from which the city’s life continues to draw.

In turn, the setting of Venice – solid, liquid and virtual – recurs as source material through perhaps the majority of the 80 newly commissioned works. In the long, isolated prelude to the Biennale Arte ritual communion, Alemani describes the marathon of Zoom calls, through which so much of her research was done, as akin to a series of ‘confessionals’ – the black box of the screen extending into the artist’s studio allowed for unexpectedly intimate, prolonged conversations, set within Venice as an imaginary shared ground.

In the Italian Pavilion, Venice is perhaps most explicitly taken as a stage on which differing potential futures might be visualized and rehearsed. Gian Maria Tosatti’s two-act environmental installation History of Night and Destiny of Comets (curated by Eugenio Viola with the support of Maison Valentino’s creative director, Pierpaolo Piccioli) is set through a huge, unwieldy series of rooms in the Arsenale – concluding with a depiction of the end of the world (or at least, of a world) as viewed from a vaporetto stop.

After journeying through a series of vignettes depicting an Italian post-industrial wasteland, ‘the night of our civilization’, the second ‘act’ ushers you onto a boardwalk (like a vaporetto stop) projecting into a dark, nocturnal sea, somehow constructed and contained within the Arsenale. Blinking lights, like distant search lights or streetlamps, spark rhythmically across the distance, as if beckoning us to come closer, or waving goodbye. Tosatti describes this scene as implying a choice: “we have to decide if we want to keep burning and drawing bright trajectories in our sky or if we want to disappear, as many other creatures did, like dead stars… a vertigo that transforms desolation into painful compassion and hope.”

Perhaps I shouldn’t have been surprised when I realised (and it did surprise me) that I was facing the same scene which permeated my dreams upon my arrival in the city – in which I had relocated to live in Venice, only to find myself in a flooded nightscape, the city rapidly sinking, its edges melting into the watery night sky like a Whistler painting, where distant lights flashed and flickered. These lights seemed to indicate where I wanted to get to, to find others I’d lost, or perhaps to be rescued. I suspect I was not alone in experiencing a dream of this sort upon my arrival in the city – the darker undercurrents tugging at our presence here are unavoidable.

In this bubbling forth of a kind of collective unconscious, Venice seemed renewed to me as a potent setting for the Biennale ritual gathering. Both the new commissions (alchemy on demand?) and the rediscovery of already-existing webs of knowledge and practice perhaps more easily take on a kind of ‘global’ existential resonance, when re-contextualised and re-purposed here. At the least, they suggest new alternative futures remain available, via these alternative pasts-within-the-present.

As a dear friend’s wise Nonna used to remind us, ‘there is nothing new under the sun’. What we think is novelty is a recombination, the possibilities of which extend beyond our wildest imagination, and therein lies our freedom.