Sinopale, International Sinop Biennial is the title of an international project that, in the context of local development, draws the civil society together with the purpose of building dialogue through culture and arts, within the framework of the “artistic production based on sharing” model.

Sinop’s  biennial of contemporary arts was initiated by T. Melih Görgün in 2006. Planned by a group of artists and cultural actors the project is realised biennially and aims at working at local, national and international levels in order to make citizens of all ages perceive anew their own living spaces with a vision for the future, reflect on urban problems, share the historical collective memory and organise it by means of artistic production, and to create a better social living space.

Sinopale has been organized as an art organization which involves the inhabitants of the city in the production process. It is a civil society activity of an artistic nature.  During Sinopale process artists organize workshops with the participation of the public enabling an expression in international language for local problems, and also trying to create an awareness of ownership and to attract attention to issues on the international agenda.

Workshops
The artists meet their partners who are citizens of different age groups and walks of life participating in the production process together with the artists within the scope of the conceptual framework. The artists and their partners track down the collective memory of the city and unearth information that will feed the production together. This practice culminates by the production of “artworks”.  Sinopale also includes various activities in order to involve the inhabitants of different age groups such as “Sinopale Kids” where art teachers carry out workshops with the children.

Exhibitions
Following the workshops, the artworks produced are displayed at various indoors and outdoors spaces at the city centre and some districts. The main venue is the historical Sinop Prison. The works are multidisciplinary (visual arts, videos, installations, documentaries, performances, mixed media, audiovisual art, etc).

Sinopale is supported mainly by local firms and individuals, and the Municipality, the Ministry of Culture and Tourism.

The 7th Sinop Biennial: Here and Where / A Politics of Location 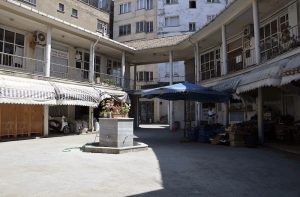 The 6th edition of Sinopale postponed until 2017

The 6th edition of Sinopale postponed until 2017 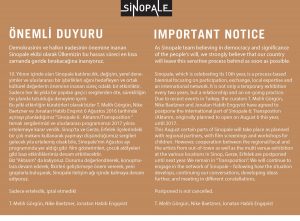 Sinopale is an event-driven, process and site oriented biennial. It is important to us to emphasize its experimental character which encourages art practices to bring forth new modes of production, experience and circulation between the field of art and daily life, inspired by locality and its place. 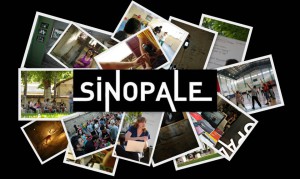 The exhibition project of Sinopale 4 proposes to invite artists and curators to deal with the notion of spreading information not through light but through shadows and darkness as a response to the existing global politics in relation to the development projects in city of Sinop.