From the very first triennial till today there has been one peculiarity that preserves a special place for Tallinn Print Triennials among other printmaking exhibitions – a special, guaranteed presentation of prints from three Baltic countries.

First Tallinn Print Triennial took place in 1968 under the name “Present Day and Graphic Form” where three Baltic countries – Estonia, Latvia and Lithuania took part. Initially it was meant to be a biennial but in practice the exhibitions appear as triennials. At that time Estonia was still under the annexation of the Soviet Union where monumental art, sculpture and painting were much favored. This gave birth to an urge among Estonian printmakers, to create a forum for demonstrating their identity. Mental support from colleagues from Latvia and Lithuania was got easily.

Prints, which are easily multiplied and distributed, became an important medium for the innovative artistic ideas and alternative relations. But it was not possible to organize such big events only for 3 Baltic States as it indicated too strongly the unity of the Baltic States versus the Soviet Union. For years it was not possible to continue without “guest” artists from Moscow, Leningrad (St. Petersburg), Minsk (in 1971); in 1974 it was a step forward already and in addition to Moscow, St. Petersburg, Minsk, Kharkov and Yakutsk it was possible to invite guests also from “sister” towns as Schwerin (German Democratic Republic) and Szolnok (Hungary).

The 8th Tallinn Print Triennial in 1989 was held in the conditions of first bigger changes in the political system. In addition to 3 Baltic countries, and Leningradit was already possible to invite artists from Finland, Poland, Canada and Hungary.

Further searches for partners from abroad concluded in special exhibitions from Belgium, Iceland, Norway, Sweden, Finland and Denmark in 1992 and from Great Britain, Italy, Japan and Germany in 1995.

Crucial year for Tallinn Print Triennials was 1998. For the first time the Triennial was open to the whole world and more than 1000 regulations were sent out.

The structure of the Tallinn Print Triennial was changed and it got 3 layers:

Especially the last mentioned feature and the themes of the curated exhibitions give Tallinn Print Triennials since the 11th exhibition a different meaning and a broader approach to the essence of a print and printmaking in the context of contemporary art world.

The 18th Tallinn Print Triennial is open to the public for the last week, so it's the last chance to visit our exhibitions! On Sunday, March 27, the official finissage will take place. During the programme following events are planned: at 1 pm Lecture-performance “Sourdough as a Metaphor”, artist Kamilė Krasauskaitė (at Põhjala Tap Room), in… 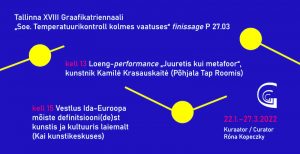 Tallinn Print Triennial is pleased to announce its 18th edition entitled Warm. Checking Temperature in Three Acts, which opens on 22 January 2022. The triennial, curated by Róna Kopeczky, primarily gives thought to the radical political, cultural political and social turns that affect Central and Eastern Europe, and  it also inscribes these changes in a global perspective…

This year the Tallinn Print Triennial celebrates its 50th anniversary. The main exhibition of the 17th Tallinn Print Triennial Cloudbusters: Intensity vs. Intention will open on the 1st of June at the Contemporary Art Museum of Estonia (EKKM). The international exhibition Cloudbusters: Intensity vs. Intention, curated by Margit Säde, examines the invisible connections and interactions between the human psyche and… 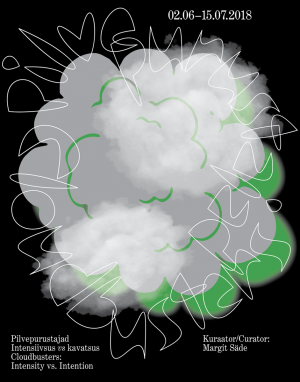 Compared to the early 20th century, the concept of literacy has acquired a new meaning today. If earlier it primarily referred to reading and writing skills, today many different types of literacy are discussed, mostly digital literacy, but also functional, mathematical, natural science and media literacy. 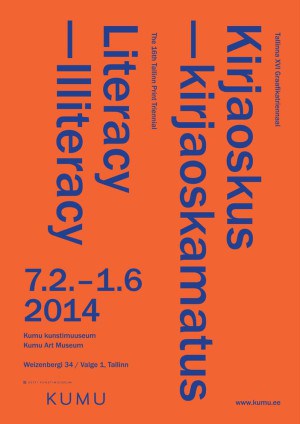 The 16th Tallinn Print Triennial „Literacy / Illiteracy“, curated by Maria Kjaer Themsen (Denmark), presents works of visual art that are produced using mechanical or digital reproduction or printing technologies, produced between 2011 and 2013 on the topic of „Literacy / Illiteracy“. The exhibition will take place in Kumu Art Museum from February until May 2014.