In a nutshell, OpenART is Scandinavia’s biggest public art biennial, running for twelve weeks in the city of Örebro in Sweden.

The project started in 2008 at the city-run art gallery, where the then Head of the gallery, Mats Nilsson and artist Lars Jonnson came up with the idea to showcase contemporary art in public locations. Contemporary art would be available for everyone – a whole new concept in the city, which would see some of the world’s most exciting artworks showcased outside the traditional norms of elitist art. The admission to the biennial, as well as the participation in collateral events is free.

The first edition in 2008 featured 71 artists, mostly from Scan­di­navia, whose works were exhib­ited anywhere from hidden corners down­town Örebro to shop windows, on rooftops or on the surface of river Svartån. In 2009, the confir­ma­tion that OpenART was becoming inter­na­tional came once the artist selec­tion process begun.

Following a new polit­ical deci­sion, OpenART became an orga­ni­za­tion of its own in 2013. It has since func­tioned as an inde­pen­dent project within the Munic­i­pality of Örebro. The event is real­ized in close coop­er­a­tion with the City Art Gallery, Örebro County Museum and Konst­främ­jandet Bergslagen.

About 80% of the artworks are exhibited outdoors, while the remaining 20% is showcased indoors. The venues vary from open spaces in the city center (parks, streets, plazas, buildings, river) to shopping malls, art galleries and museums. Therefore, artworks can be spotted in/ on /above the river that flows through the city, squeezed between buildings, hanging on rooftops, hiding around corners, in trees or on light poles. A huge focus is on large-scale artworks, that challenge the physical perception of the surrounding environment. 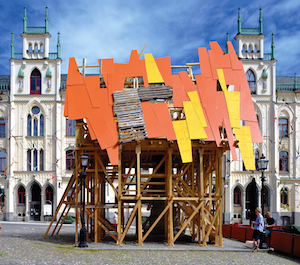 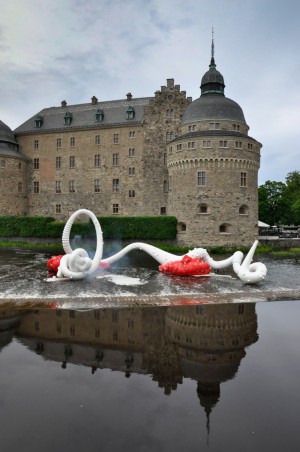