Useful disruption and productive conflict have always been part of steirischer herbst—an institution that has sparked dialogue time and again throughout its history.

Every autumn since its founding half a century ago, the festival has provided a platform for new productions, provoking and shaping public debates in a variety of forms across disciplines and media. Reinventing itself many times over, steirischer herbst has always redefined the terms of the conversation about what culture might mean in a changing contemporaneity, as seen in Graz, Austria’s second most populous city.

steirischer herbst was founded in the pivotal year of 1968, in opposition to the resurgence of nationalist cultural initiatives gaining traction at the time. This founding moment drew upon a tradition of international modernism in music, theater, and visual art—which the Nazis had labeled “degenerate” three decades before—and the belief that it could (still) provide a bulwark against the deep-seated remnants of the totalitarian mentality in the world. steirischer herbst would appear on the scene with the unexpected force of an earthquake, cutting across the wholesome idea of a cultural “autumn harvest” in a region very proud of its wine and fruit. It would enchant, confound, and shock audiences out of their complacency, in the seemingly placid former retirement-capital of the Hapsburg monarchy.

Indeed, part of what has made steirischer herbst unique over the course of its history is its engagement with Styria and the city of Graz. The festival emerged through the initiative of the local scenes and continues to play an important role establishing networks to this day. It has also regularly featured work that delves into Graz’s uneven present and its complex, sometimes troubling past. Activating many if not most of the city’s cultural spaces, the festival rendered the city and the region legible as a text, with new chapters appearing every year.

From its very beginnings, steirischer herbst stood out as one of the world’s few interdisciplinary art festivals, long before the fashionable overuse of the term. Fostering dialogue between the arts by combining aesthetic positions with theoretical reflection, the festival’s various iterations have integrated visual art, music, art in public space, theater, performance, new media, literature, and everything in between, with an emphasis on one field or the other varying over the years. This point remains central to the festival’s approach today, as it emphasizes work that refuses to be bound by the rules and traditional scope of separate cultural fields.

Under the directorship of Ekaterina Degot, who has been heading the festival since 2018, the festival continues in the collaborative spirit of its founding and stays true to its focus on international breadth and local depth. It seeks to foster long-term engagement and the production of new work based on in-depth research and emphasizes urban and regional narratives in their sometimes bizarre relation to global processes. Its central projects can be read as one big exhibition—a single parcours—its elements time- and site-specific, presenting a new way to inhabit social spaces and be engrossed in the stories they might tell.

A strong focus on the social and political urgencies in Austria goes hand in hand with an international orientation. An integral part of the festival in its early years was the so-called Trigon Biennial, named after the polygon shaped tri-national border of Austria, Italy, and former Yugoslavia. Now, once again, as inequality and nationalism spread both in Eastern and Western Europe, it seems crucial to rekindle this interest in the search for points of connection and solidarity. It is precisely the feeling of marginality, sometimes poignant, sometimes cozy, as experienced in Styria that fosters a sensitivity to other frontier regions, where the purported normalcy of the global order appears in all its surreality and weirdness on the fringes.

steirischer herbst pursues a critical agenda and supports practices that are engaged and engaging. That does not mean that the festival is simply a platform for alternative politics. Instead, it aims each year anew to turn the city into a stage upon which art’s unique imaginative potential—its capacity to tell wild stories and shift shapes, to make impossible conjectures and poetic jokes, to take over spaces and occupy the imagination—is on full view. 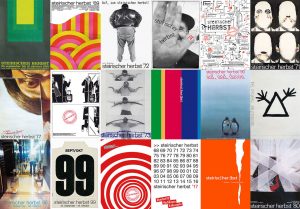 The interdisciplinary festival of contemporary art steirischer herbst, based in Graz and Styria, Austria, is pleased to announce the publication of the catalogue of its 54th edition, The Way Out, as well as that of the accompanying reader The Way Out of.... Today’s institutions of contemporary visual art are sometimes working in a mode of… 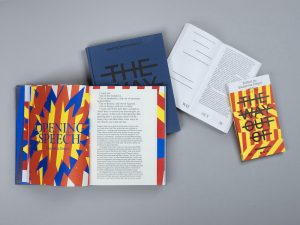 Steirischer Herbst is initiating a fellowship program aimed at established as well as emerging researchers who would like to delve into the festival’s rich history. The newly inaugurated Research Residency Fellowship seeks to make the festival’s archive resources accessible as part of its mission to place the history of Steirischer Herbst in dialogue with contemporary academic work. The fellowship supports and encourages innovative scholarly, creative, and interdisciplinary inquiries into the festival’s practices and history. It supports and encourages new perspectives and readings of its legacy. 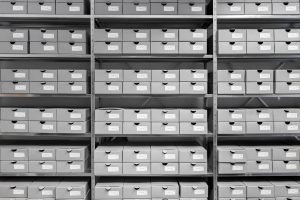 Today’s art institutions are often stuck in a mode of imaginary participation, while real audiences might give these institutions a wide berth. Such self-isolation represents a huge blind spot of contemporary art, especially when it consists of social, activist, engaged, and participatory practices. Why don’t we as curators try to escape our comfort zones and…

The Way Out steirischer herbst ’21 September 9–October 10, 2021 During the recent lockdowns, theaters and traditional museums were sorely missed; but was it the same for the institutions of contemporary art? The public was painfully oblivious to their absence, and, somehow, the feeling was mutual. Our historical pedigree, the avant-garde, translates into a vivid… 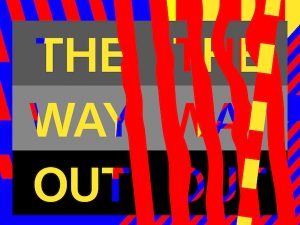 steirischer herbst '20: Paranoia TV September 24–October 18, 2020 As we approach the halfway point of 2020, sanity seems to slowly be returning to some parts of Europe. Art is even allowed back into people’s lives. In Austria, for instance, galleries reopened at the same time as gardening stores, with museums quick to follow (albeit with baby steps… 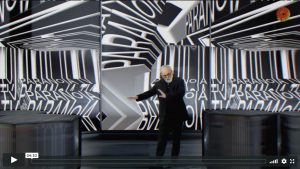 steirischer herbst ’19 Grand Hotel Abyss 19.9.–13.10.19 Opening Days: 19.9.–22.9.19 In one month from now Grand Hotel Abyss opens its doors to the public. This will mark the start of almost four weeks of installations, performances and discursive events, taking place in Graz and Styria. In anticipation of this grand and extravagant opening →Opening Extravanganza, it is with great pleasure… 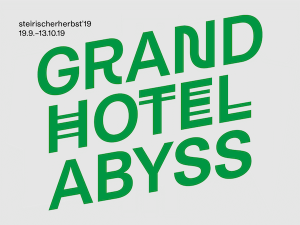 steirischerherbst'19 announces artists for the 2019 edition

steirischerherbst'19 Grand Hotel Abyss September 19–October 13, 2019 Various venues in Graz and Styria Good organic food, exquisite wines, stunning landscapes, and little historical baggage to worry about: Austria is such a nice place to be. Unless Ibiza lures with even more opportunities on offer from Russian oligarchs. And then, suddenly, it all turns out…

Grand Hotel Abyss Various venues in Graz and Styria, Austria September 19–October 13, 2019 Opening days: September 19–22, 2019 steirischer herbst is an interdisciplinary festival for contemporary art established in 1968 in a challenging political and geographical context, in a country with many historical skeletons in the closet, in a town right at the Cold…